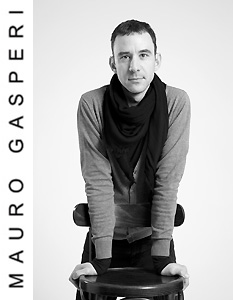 Mauro Gasperi was born in Brescia 10th November 1979.
His education and training has been developed through the art school “V. Foppa “(1997) and the “international fashion Polimoda” (2002) in Florence specializing in fashion and knitwear.
In 2001, during a competition organized by the School, he was selected as the designer for the brand Paola Frani, giving rise to a period of cohoperation with the company in Saint Mauro Pascoli.
In 2003 he also worked for a period at the style office of the “Dolce & Gabbana Factory “ in Legnano.
In 2007 he decided to draw his own brand for women completely MADE IN ITALY: by choosing “Mauro Gasperi” he was driven the desire to emerge, from the desire to communicate through his design details in knitwear, dresses and outerwear.
In 2008 the first flagshipstore “Mauro Gasperi” is in Brescia, the hometown of stylist.
In 2009 Mauro Gasperi wins the competition “FASHION INCUBATOR” organized by the National Chamber of Italian Fashion.
He enters in the project NEW UPCOMING DESIGNERS and is one of the protagonists of the third edition in MILAN FASHION WEEK of September 2009; always in this month, the spring / summer collection 2010 makes its debut in Tokyo, as preview, at the “Spiral Hall “of the prestigious Tokyo Midtown complex, located in the heart of the city’s fashion district. One month later, during the Russian Fashion Week, he presents his collection in Moscow and in Berlin as guest of the Mercedes Benz.
In 2010 Mauro Gasperi has his catwalk during the Milan Fashion Week: on February 2010 at the Milan Fashion Center and on September at the Circolo Filologico Milanese.
On February 2011 catwalk is still at the Circolo Filologico Milanese and gets success again and the brand confirms as a strongly connotative and image one